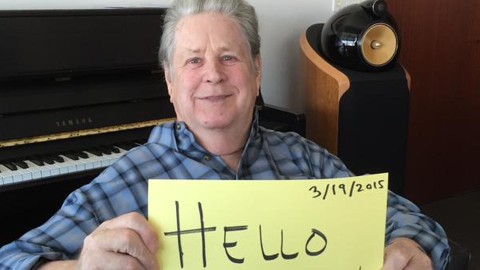 I am Brian Wilson, co-founder of The Beach Boys. AMAA!

My new Capitol album ‘No Pier Pressure’ is out April 7th (you can pre-order it here ) and I’ll be heading out on tour in June (dates at http://brianwilson.com).

‘Love & Mercy,’ a film about my life starring John Cusack and Paul Dano, and co-starring Elizabeth Banks and Paul Giamatti, will be in theaters on June 5th (http://loveandmercyfilm.com).

I was lucky enough to go to the film’s U.S. premiere last Sunday at SXSW in Austin.

I’m at the historic Capitol Records building in Hollywood, ready to answer your questions. AMAA!

A lot has been written about a rivalry between you and Lennon/McCartney, particularly about their desire to compete against Pet Sounds. I know it’s a long time ago, but did you feel the same level of competition with the Beatles?

There was mutual admiration, competitiveness not a rivalry. ‘Pet Sounds’ inspired ‘Sgt Pepper.’

Who was your most memorable fan?

When I was in Washington DC about 8 years ago receiving the Kennedy Center Honor, President Bush and I met – I said “Nice to meet you” and he said “I’m one of your fans.” I was thrilled

What did you think the first time you heard the Barenaked Ladies song, “Brian Wilson?”

I bought my first Beach Boys album at a yard sale in the early 70s. I’ve been a fan since then. Do you remember the first album/record you bought?

The first album I bought was Four Freshmen and Five Trombones. It changed my life.

What is your favorite movie?

The Birds by Alfred Hitchcock because it had a sense of humor. Some guys car blew up and he got killed and it made me laugh for some reason running from the birds.

How did you feel about seeing John Cusack and Paul Dano portraying you on film? Is it weird to see aspects of the life that you really lived acted out by others?

Do you have a favorite Bob Dylan song?

Blowin’ In The Wind i like the lyrics. I met Bob Dylan in an emergency hospital in Malibu..he accidentally had his thumb broken. It was a cool place to meet him. I’m a fan of his for sure

If you could give any advice to yourself at age 18, what would it be?

You had a very well publicized battle with depression for a part of your life. What do you credit with helping you break out of it and getting your drive to make all that great music back?

My doctor turned me on to exercise, running was what helped break me out of my depression and get me back to songwriting. That among other things.

Medium rare with ketchup on top

Could you describe your most vivid childhood memory? Musical or otherwise?

The first time that my brothers and I saw the ocean. My dad brought us there. That was the most memorable part of my childhood.

I talk to Paul about once a year. We get caught up on music & family.

If I were Brian Wilson and you were me, what would you ask?

I would ask you What does it feel like to have a number one record on the charts?

What does it feel like to have a number one record on the charts?

What one thing do you most want to say to the whole world?

Good vibrations to you all!

I’m sure you still often get recognized by fans when out in public. How do you feel about fans approaching you?

What is your favorite track from the Beatles Sgt. Pepper’s Lonely Hearts Club Band album?

What’s been your favorite part about seeing Carnie and Wendy achieve their own success in the business?

I’m most proud of their sound. They sing like angels

What does it take to keep your voice in such amazing condition after years of singing amazingly?

Favourite place to go in London?

What songs or albums would you recommend to someone trying to get into the Beach Boys?

What is your favorite song from the Love You album?

“Ding Dang” because I like my brother Carl’s vocal

What made you decide to be so open and honest within the lyrics and the way you wrote ’Til I Die?

Because I was being humble when I said “I’m a rock on a landslide, I’m a cork on the ocean…” It’s a very humbling song.

What musicians do you admire that have come along in the next generation? Anyone that would surprise people?

Al Blaine because of his great drumming. He played on “California Girls.”

Could you tell us the name of your favorite vegatables?

What song on No Pier Pressure do you enjoy the most?

Sail Away because of Blondie’s performance

Any other Smile’s sitting in your closet waiting to be released?

No, Smile was a one of a kind.

When writing some of The Beach Boys songs, specifically Pet Sounds/SMiLE era, did you have a melodic structure to follow or did the songs just come to you sitting on a piano or out of nowhere?

The songs came to me sitting at a piano and out of nowhere and came down from my brain and onto the keyboard.

My favorite key is B, the song “Darlin'” is in B. No favorite chords, but I like Major chords.

What is the greatest advice you have been given?

Follow through with my songs and don’t stop halfway through the song. Write the whole song.

50 to 100 years from now, what do you want people to take from your legacy of music?

The timelessness of “California Girls” and “Surfer Girl,” maybe who knows?

What’s one little-known fact about you or your life that you’d like people to know?

That I’m deaf in my right ear and that I used to do transcendental meditation at my house. Most people don’t know that.

I miss the spirit of competition and all the cool restaurants and places we used to hang out.

Since this might be your last tour, will you consider coming to the UK?

Well…as I’ve said before this could be my last tour but of course I will try to get to the UK.

How did you come up with the title “do you like worms”?

Van dyke came up with that title. I thought it was a strange strange title.

Are you a TV game show fan? Which one would you like to a contestant?

How was it filming with the cast of Full House?

I’ve never been on Full House

What makes you cringe when you hear a bad tune? Any cliche’s that bug you?

It bugs me when people sing flat

Do you have a favourite concert venue that you like performing in the most?

Have you ever met John Lennon?

He’s the only Beatle I never met but I admire him, very much so. I’ve spent time with both of his sons Sean and Julian.

What made you make the decision to get back in touch with Blondie Chaplin? Personally I think it’s a great reunion and I can’t wait to hear all of “Sail Away” and see you guys on tour!

Blondies voice was the only decision we needed he adds so much to the songs he’s on. Can’t wait to go on tour with him!

What do you look at as your greatest accomplishment?

Any advice for a young singer?

When did you discover your fascination with Gershwin?

When I was about 27 or 28, a friend of mine taught be how to play the pretty part of Rhapsody In Blue. It brought me back to when I first heard it when I was 3 years old.

What was your favorite thing about the process of creating Good Vibrations?

We used 4 different studios to record it. Choruses at Western studio, the bridge at Sunset Sound, the vocals at RCA Victor, and the verses at Goldstar.