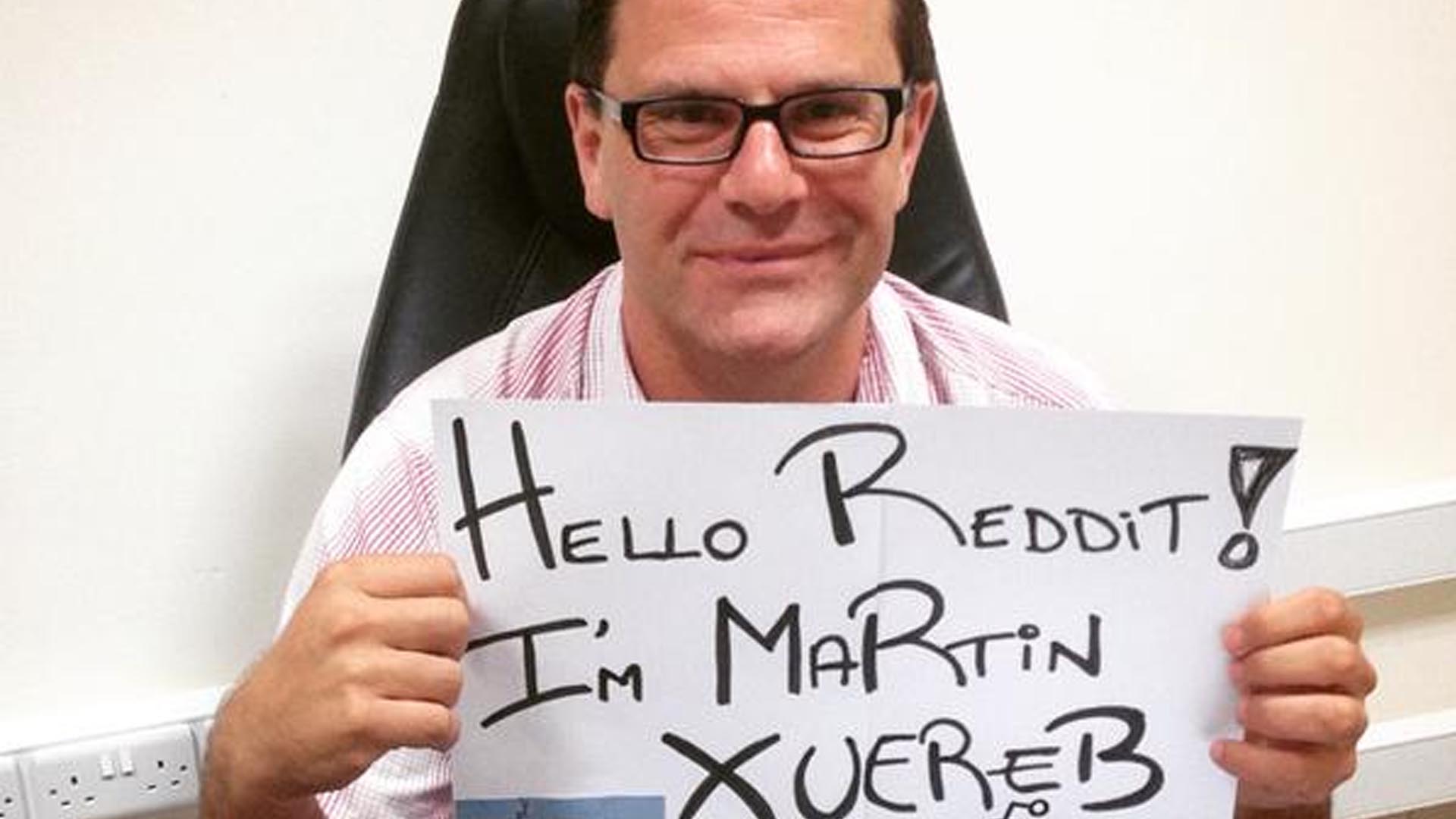 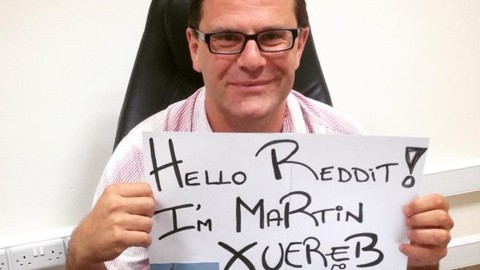 I am Martin Xuereb, director of Migrant Offshore Aid Station (MOAS), a search and rescue charity that specialises in saving lives at sea.

MOAS (www.moas.eu) operates in the Mediterranean Sea, the most dangerous border crossing in the world. At least 5,000 men, women and children have drowned trying to make the journey from North Africa to Europe since 2014.

In a few months of operation, MOAS has already saved almost 8,000 men, women and children from crammed unseaworthy vessels sent out to sea by ruthless smugglers.

We conduct maritime Search and Rescue operations from a 131-foot vessel, the M.Y. Phoenix. Our vessel is managed by an experienced crew of rescuers and kitted out with state-of-the-art drones, two high-speed rescue boats, a fully-stocked clinic, and lots of other search and rescue equipment. On board, Doctors Without Borders (MSF) provide the people we save with post-rescue care.

What was the deepest connection you’ve made with a refugee?

My deepest connection predates MOAS. I will never forget the look on the face of a young boy who was brought back to Malta in a body bag after a rescue conducted by the Armed Forces of Malta. His eyes were wide open and you could sense the fear he must have felt when he knew he was about to die at sea. He was the same age as my son at the time and his face haunts me to this very day.

Did that experience motivate you more than any other?

Yes it did. This is when I realised that this is about individuals not statistics.

Is there really any possible solution to this immigration crisis? What can the European powers in your opinion really do to mitigate this issue?

There is no immediate solution but while debates continue, people need to be saved. What I think is that every discussion by the European powers must start with an acknowledgement that no one deserves to die at sea. The European powers need to share the responsibility to save lives. There needs to be a global approach to address issues in countries of origin, transit and destination.

What is your thoughts on the Australian way of handling the boat refugees/asylum seekers by putting them into detention centers?

There should always be a humanitarian approach when it comes to discussions surrounding migrants and refugees. I do not think Australia is including this concept in her policy.

When you finally get to lay down at night, what are normally your last thoughts before going to sleep, regarding what you do?

That entirely depends on how the day has gone. If we were talking about tonight, for example, my thoughts will definitely be with the 300+ people boarding the Phoenix at the moment.

What is the largest obstacle in your line of work?

Putting the message across that no one deserves to die at sea and inspiring people to fund the cause.

How did the idea of creating something like MOAS come to your mind? How did you recruit the people in MOAS? How much do you yourself spend on the MY Phoenix?

It was Chris and Regina Catrambone, the founders, who created the concept of MOAS and I was brought in to translate their vision into a reality. We recruit on the basis of who fits the job profile best.

For more information on how MOAS came into being you can refer to our website: http://www.moas.eu/

Do you plan on trying to obtain more vessels for your work? Where is the next stop for the migrants you save? (i.e. Where do you take them?) What sort of immigration process do they have to deal with?

We would like to expand the operation if we raise enough funds. We need to keep in mind that people are dying at sea not only here in the Mediterranean.

What’s the most common accident that happens to people at sea?

Typically the boats are extremely overcrowded and unseaworthy so they are extremely prone to capsizing. In the case of makeshift rubber boats, they can simply deflate. Keep in mind here that these people are often severely dehydrated, intoxicated from fumes and unable to swim. This year alone around 1,800 people have drowned in the Mediterranean.

Has anyone you’ve rescued gotten out of hand, become a threat to the crew?

No never, people are just relieved to have been saved. After so many weeks or months of abuse and distress people are thankful to see a friendly face.

How did you come about working for an NGO?

I never thought I would be working for an NGO. I majored in sociology and politics, spent 25 years in the Armed Forces and then had the privilege to meet the Catrambones.

How far short is the cumulative Mediterranean rescue effort falling at the moment in your opinion? How much capacity is needed to ensure no lives are lost?

That’s a good question and it’s difficult to find an answer. With increased capacity the chances of survival for people at sea increases. This summer Europe appears to have responded in terms of search and rescue. What we hope is that the focus on saving lives at sea continues to be a priority as long as there is a need.

Malta has seen a significant decrease in the arrival of immigrants this year, while Italy (and Sicily) have had a worrying number of immigrants arrive on almost a daily basis. Why do you think this is? Are the illegal smugglers somehow getting them closer to Italian shores than before?

Italy has taken the lead in coordinating rescues in the Libyan search and rescue region. This also means that, as a result, people saved tend to be disembarked in Italy.

Why does your organization disembark illegal immigrants in Europe when there were closer ports such as in Malta? Also, what do you think about current discussions by Frontex to indict you under people smuggling legislation?

It is the rescue coordination centre that decides where to disembark. Also, Malta is in Europe too 😉

About Frontex, that’s news to us!

What legal or customary rights do you think you operate under which allows you to disembark illegal immigrants in Europe?

Where those people are then disembarked is a decision made by the rescue coordination center.

My understanding is that you don’t actually liaise with Frontex over your activities. Hence you are not directed to disembark the illegal immigrants you take anywhere. Rather, the Catrambones have on a number of cases stated that their desire is to “help” illegal immigrants reach mainland Europe. I am glad that you brought up UNCLOS, can you point out the paragraph which gives you the legal or customary right to disembark passengers in any port without regard to their legal status to be dismebarked?

In terms of search and rescue, both MOAS and Frontex assets respond to the rescue coordination center. According to the SAR Convention of 1979: “4.8.5 The rescue co-ordination centre or rescue sub-centre concerned shall initiate the process of identifying the most appropriate place(s) for disembarking persons found in distress at sea. It shall inform the ship or ships and other relevant parties concerned thereof.”

Do you think the people you rescue should be resettled in Europe or returned to their country or point of origin?

The first thing that should happen is that they should be given the opportunity to apply for asylum. It is that process that determines what happens next.

We always talk about flying drones, but do you have any knowledge about other kind of technologies which could be used? I know that scientists are using long term “sea drone” to follow or research fishes and sea currents, some can even stay floating for months!

Do you think a Mare Nostrum operation could be restored? If so, would you be willing to get involved?

Whether it’s a dedicated search and rescue operation like Mare Nostrum, or otherwise, what’s important is that there are vessels at sea cooperating in saving lives.

We worked well with Mare Nostrum last year and this year we are also cooperating not only with state vessels but also several private entities, including our partners at Doctors Without Borders.

What do you say to the argument that by facilitating people smuggling into Europe you are exacerbating the deaths of illegal immigrants drowning in the Med?

Since launching MOAS, I am convinced more than ever that people leave their country of origin and risk their lives at sea because they feel they have no other option. It is not a choice but a result of desperation. We are not a pull factor we are just responding to a pre-existing phenomenon. Our presence saves lives. The ‘pull-factor’ myth was debunked late last year when there were no dedicated search and rescue operations at sea and migrants kept crossing even during the most dangerous winter months.

What was the most touching thing you have ever seen on one of theses rescue missions? And also where do you take these refugees after you rescue them?

Seeing people sleeping on board the first night after a rescue is always touching for me. I know that this is the first night in many weeks where they feel completely safe.